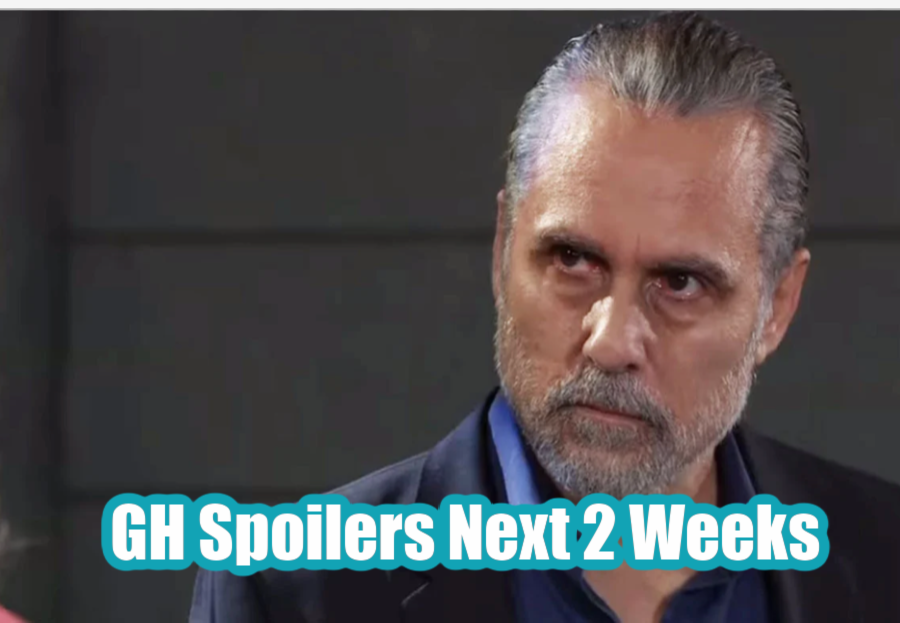 General Hospital spoilers for the next two weeks, November 22-26 and November 29-December 3 promise everything from joy to heartbreak and everything in between for GH fans! Remember, Thanksgiving week is a short one with GH pre-empted on Thanksgiving Day and there’s a rerun on the day after.

General Hospital spoilers for November 22-26 start off with two big exits – Jasper “Jax” Jacks (Ingo Rademacher) says goodbye to General Hospital and Port Charles on Monday, November 22. Jax will run into Carly Corinthos (Laura Wright), but it sounds like he’ll just say hi and bye. The most likely scenario is that the character is returning to Australia, with his love life in the crapper, his ex-wife and he on not such good terms, and their daughter Josslyn Jacks (Eden McCoy) now a freshman at college. He likely said goodbye to her off-screen, and there is no word on any recast.

But as for the other exit, it looks like Jason Morgan (Steve Burton) is really getting killed off the General Hospital canvas this time – although there have been no formal announcements on this actor’s exit like there have been with Ingo. General Hospital viewers will recall that Jason was in a shootout with Peter August (Wes Ramsey) in the tunnels underneath the surface of Cassadine Island as Drew Cain (Cameron Mathison) and he were trying to take Liesl Obrecht (Kathleen Gati) and Britt Westbourne (Kelly Thiebaud) to safety.

The tunnels, unstable as Liesl had warned, caved in on Jason and Peter was nowhere to be found – a preview showed Drew, Liesl and Britt unconscious on the floor of the tunnel although it looks like they’ll make it out. Anna Devane (Finola Hughes) and Robert Scorpio (Tristan Rogers) were on their way to the island but it looks like they are too late to save Jason!

GH Spoilers: Sasha Gilmore And Son Fight For Their Lives

General Hospital spoilers November 22-26 will also see Sasha Gilmore (Sofia Mattsson) as well as her newborn Brando Michael Corbin (uncast infant) fight for their lives! General Hospital viewers will recall Sasha went into labor and her water broke while she and Gladys Corbin (Bonnie Burroughs) had been locked in a storage room at the Jerome Art Gallery by Esme Prince, (Avery Kristen Pohl) who’d thought she had Trina Robinson (Sydney Mikayla) trapped in there! Luckily, Brando Corbin (Johnny Wactor) went looking for Sasha and got the door open and all went to General Hospital.

Sasha suffered placental abruption, necessitating an emergency caesarian section. Sasha is in danger of bleeding out on the operating table, and baby Corbin was rushed away for lifesaving measures. Brando and Gladys are both basket cases inside although they both put on a brave face! Gladys is in such a state that she’ll even enjoy a truce called by Sonny Corinthos (Maurice Benard) and even Carly will agree the struggling new grandma needs all the family support she can get! Sasha will get a surprising visitor, and since Michael Corinthos (Chad Duell) and Willow Tait (Katelyn MacMullen) are planning to go to New York City with Wiley Corinthos (Caleb and Kyler Ends) it’s probably going to be Nina Reeves (Cynthia Watros).

Valentin Cassadine (James Patrick Stuart) may even drop in! Speaking of Valentin, he and Brook Lynn Quartermaine (Amanda Setton) were shocked by Detective Harrison Chase’s (Josh Swickard) sudden pronouncement of fatherhood of “Bailey Lois Quartermaine” (Harper and Scarlett Bloom)! Chase has figured out that “Bailey” is really Louise August (Harper and Scarlett Bloom) and protection of Maxie Jones’ (Kirsten Storms) is paramount. Chase will even have a fake paternity test showing he’s the father, and Brook Lynn will have to come up with a new cover story to tell her father, Ned Quartermaine (Wally Kurth) while Chase does the same with his brother, Dr. Hamilton Finn (Michael Easton).

Also during the week of November 22-26, Sam McCall (Kelly Monaco) and Dante Falconeri (Dominic Zamprogna) will spend their first Thanksgiving together as a couple. Remember, this is a short week for General Hospital, and the Thanksgiving dinners in Port Charles will stretch past Thanksgiving into the week of November 29. General Hospital viewers might get a rare sighting of Danny Morgan, (Porter Fasullo) Scout Cain, (Ella Ramacieri) and Rocco Falconeri (O’Neill Monahan), or it is just as likely they won’t be seen until the next week at the annual Quartermaine Thanksgiving pizza party!

Portia Robinson (Brook Kerr) will spend some time with Curtis Ashford (Donnell Turner) and she’ll find out that the “Mystery Man” might be Curtis’ presumed dead father, Marshall Ashford (Robert Gossett). Curtis did seem pretty convinced when he saw the years old family photo that Marshall left with him, with him and his late brother Tommy Ashford (uncast character) as small children, along with their late mother. However, he still may demand a DNA test to be absolutely sure!

The action will pick up on General Hospital on Monday, November 29 as Sam will have bad news and good news to break to her two children. Dante and Sam will be together when they receive some news, and the bad news will be that Jason’s presumed dead. Again, Sam will have to tell their son Danny that his father is presumed dead, while it sounds like she’ll have good news to tell Scout, when they hear that Drew is alive. Let’s not leave Jason’s other son with Elizabeth Baldwin (Rebecca Herbst), Jake Webber (Hudson West) out; he’ll need to be told about Jason’s death, or presumption of it as well.

General Hospital spoilers don’t mention this but perhaps it will happen off-screen and it will be mentioned. Jake would be happy that his Uncle Drew is alive but devastated that his father Jason is probably not – but he may hear a heroic tale of his uncle and his father finally having worked together as a team, as he so badly wanted before Drew left for Afghanistan and was presumed dead himself! Valentin also received some bad news and a huge heartbreak while Anna was in Greece, and he’ll confide his heartache over finding out “Bailey” isn’t his to Anna. He’ll work on finding closure.

During the week of November 29-December 3, Sonny will receive an unsettling call – probably about Jason’s presumed death in the tunnels on Cassadine Island. Sonny will be in shock, as will Carly, to hear the dire report. Sonny will reach out to Damian Spinelli (Bradford Anderson), in hopes that his cyber sleuthing might pick up a sign of life, and Sonny will likely call on all his other resources as well to try and find Jason. Carly will come face to face with Britt, who will likely deliver the bad news in person. Carly won’t take it real well! Sonny and Carly will spend a long and difficult night, but it looks like they may have to face the fact that Jason really is dead this time.

Meanwhile, more Thankgiving celebrations will take place around Port Charles – including the traditional Quartermaine pizza party, with all the traditional squabbles! However, they will also have an unexpected reunion – and that might be Drew. Austin Gatlin-Holt (Roger Howarth) will commiserate with Britt, while Liesl Obrecht (Kathleen Gati) will receive an unexpected visitor. No one’s sure where Victor Cassadine (Charles Shaughnessy) ran off to, and one would think a visit from Scott Baldwin (Kin Shriner) would be very expected – let’s just hope it’s not Peter! Alexis Davis (Nancy Lee Grahn) will have a Thanksgiving feast of her own in which she’ll think about her future and possibly consider a new career going forward.

Portia will also have a Thanksgiving get together while Marshall shows up at General Hospital and corners TJ Ashford (Tajh Bellow) who apparently has to work. Let’s hope Marshall isn’t trying to swipe some grandson DNA to compare to his to prove to Curtis he’s his father – he’ll be in for a big shock. Marshall is out of the loop and likely has no idea that Tommy wasn’t TJ’s father! Sonny will give fatherly advice to Brando, so it looks like little Brando will survive; Brando and Nina will continue to support Sasha. Chase and Brook Lynn will let Maxie in on Chase’s plan and promise to continue to keep her and “Bailey” safe – but she, like Liesl, will also have a surprise visit from someone – and it could very well be Peter!

The Bold and the Beautiful Spoilers: Did Brooke Really Call…

Bernice Emanuel Sep 28, 2022
The Young and The Restless

The Young and the Restless Spoilers: Bryton James Opens Up…

General Hospital POLL: Will Sonny’s Family Ever Accept His…