General Hospital Spoilers: Heather Kidnaps Esme and Goes on the Run in an Effort to Dodge Ryan 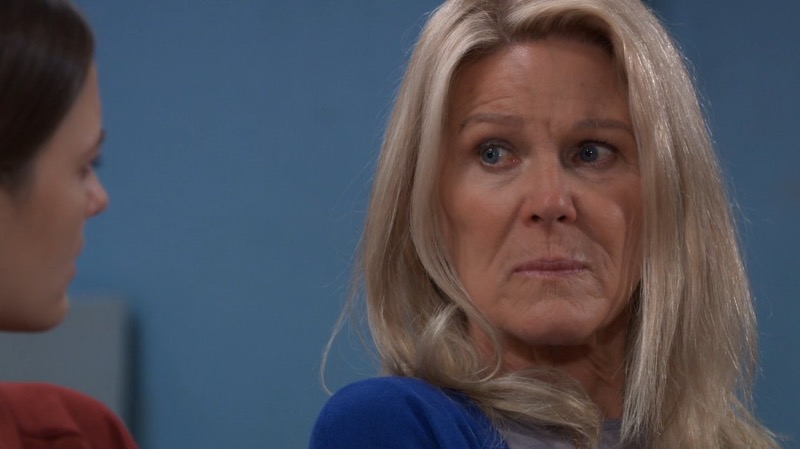 General Hospital Spoilers reveal Heather Webber (Alley Mills) has her sights set on Esme Prince (Avery Kristen Pohl) ever since the young mom-to-be got remanded to Spring Ridge. She has no idea she’s locked up with her mommy and daddy, but they do.

Heather has already weaseled her way into Esme’s orbit, but she gave her the creeps and Esme couldn’t get away from Heather fast enough — even to the extent of preferring to sneak off to her cell than hang out in the common area any longer listening to Heather cozying up to her. We’ve learned a lot from this exchange, and what happens next could change the landscape of Esme’s relationship with the only birth parent she’s ever known — Ryan Chamberlain (Jon Lindstrom).

For the last few weeks since Esme climbed out of the icy waters and aboard the Haunted Star on New Year’s Eve, she has claimed she has no memory of who she is, where she came from, or the alleged crimes she’s been charged with. Convenient? Perhaps, but Esme’s behavior since being sent to Spring Ridge is making a more compelling case for her amnesiac status.

It looks like she might really be suffering from memory loss given that she is so scared and confused. She doesn’t seem to know much of anything about Ryan, but that could be an act she’s putting on for Heather, whom Esme isn’t aware is her birth mother.

GH Spoilers Hint Ryan May Get in Heather’s Way

Heather was certain to start poisoning the well by telling Esme lies about Ryan (or are they?) that should make her want to steer clear of the psycho. That being said, Esme might not be keen on taking any advice from Heather given how strange her behavior was. That won’t stop Heather from trying though.

She doesn’t want Ryan ruining her shot at a relationship with Esme, and she thinks being the first person to get to her and write her own narrative into Esme’s mind should do the trick. However, it is inevitable that Ryan is going to find out Esme is at Spring Ridge, and he’s going to find out what Heather is up to. Esme might even tell him willingly if her amnesia is an act. What then? How will he explain Heather?

Will Heather be able to get Esme to go on the run with her without telling her the truth about their connection? Heather was delighted to see her baby girl again after all these years, but her overeager attitude has Esme feeling claustrophobic and wondering if Heather’s longing for the child she claimed to have lost may be pushing her to conflate her feelings about Esme’s unborn child. Either way, Esme ran away after Heather gave her the willies.

So it’s going to be a challenge for Heather to get Esme to hop on board with her plan to make a run for it. Heather clearly has the means to break out of Spring Ridge, and now that she knows how scared Esme is of losing her child when he or she is born, that might be just how she convinces her to tag along. Stay tuned for more GH news and spoilers just ahead.

The Bold And The Beautiful Spoilers UPDATE Wednesday, January 25: Steffy And Eric Disagree With Hope, Deacon Continues To Question Sheila

The Bold and the Beautiful Spoilers: Finn Wakes Up To A…