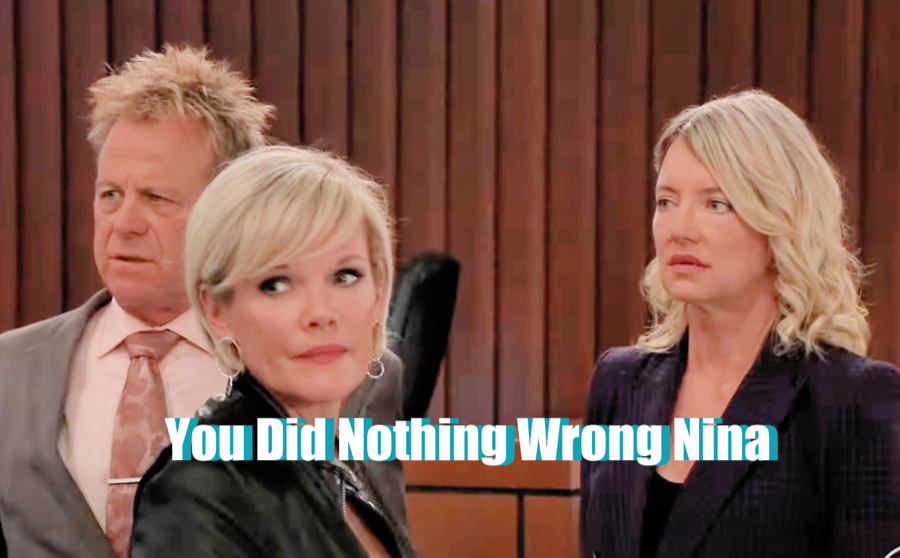 General Hospital spoilers and updates tease that Ava Jerome Cassadine (Maura West) will tell Nina Reeves (Cynthia Watros) what she can do to get out of the situation that she’s currently in. She’ll remind her to use her romance secret with Sonny Corinthos (Maurice Benard) as leverage.

Next week, fans will witness Nina get arrested for identity fraud and it will all go down in front of Sonny. Fortunately, Scott Baldwin (Kin Shriner) will provide her with legal assistance. Not only that, Ava will be there to help her out, too. She’ll remind Nina that she can always use her secret romance with Sonny to her advantage.

Scott may find a way to file a lawsuit against those who charged Nina with identity fraud. Maybe, he’ll use Nina’s plight to his advantage and get revenge on the Corinthos clan. Nina didn’t steal Sonny’s identity nor did she use his personal information for personal gains. So, Scott has a chance to get her off the hook.

As for Nina and Sonny’s secret romance back in Nixon falls, it may all be revealed soon when Michael Corinthos (Chad Duell) visits Jasper “Jax” Jacks (Ingo Rademacher) and makes him an offer that he may not be able to resist. Michael may also fire Nina from Crimson to make her suffer even more.

Jax may turn Michael’s offer down unless the latter wants to ruin Sonny and Carly Corinthos’ (Laura Wright) marriage. He may remind Michael that if he decides to target Nina, the latter may reveal what she and Sonny had when they were in Nixon Falls. When that happens, Michael will have to make a tough decision.

Meanwhile, Sonny will confront Carly over Nina’s arrest. But Carly will say that Nina deserves to be in prison. She’ll be so furious at Nina that she’ll forget the things she’s done in the past that could have landed her in prison, too.

Will Anna Finally Confess Her Love?

As for Anna Devane (Finola Hughes), she may think of confessing her love for Valentin Cassadine (James Patrick Stuart). She’ll be worried that she may never get the chance to say her true feelings for him if he dies. However, she may end up telling Valentin that he means a lot to her but won’t confess that she loves him dearly.

The Bold and the Beautiful Spoilers: Finn To Divorce Steffy…

Bernice Emanuel Jan 15, 2023
The Bold and The Beautiful

The Bold and the Beautiful Spoilers: Naomi Matsuda Admits…