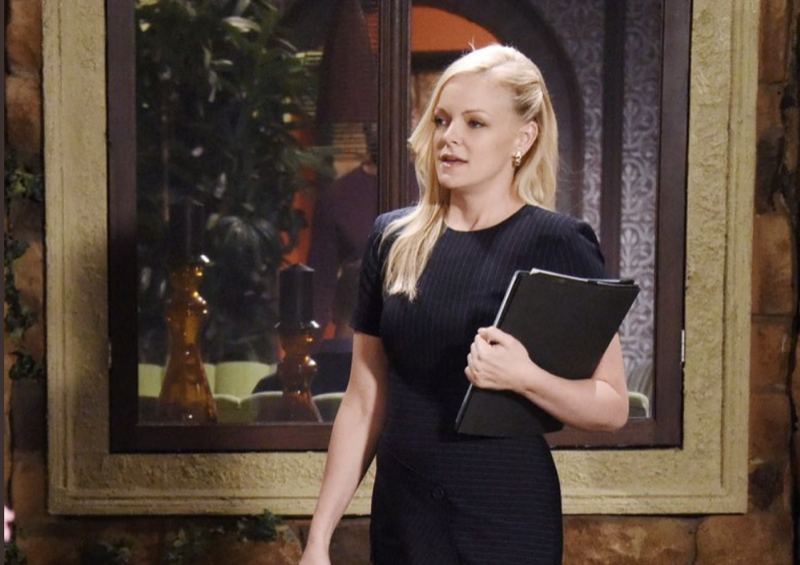 Days of Our Lives (DOOL) spoilers tease that Johnny DiMera (Carson Boatman) finally found the last of the financing that he needed to begin production of his movie. But not everyone in Salem is happy about the subject matter. Dr. Marlena Evans (Deidre Hall) was first possessed by the devil twenty-five years ago and while Johnny still doesn’t believe in demonic possession, he does feel that it will make a great movie. He has even cast Abigail Dimera (Marci Miller) to portray Marlena.

Days of Our Lives Spoilers – John Black thinks the movie is a very bad idea.

John Black (Drake Hogestyn), who was a priest at the time and is now Marlena’s husband doesn’t want the movie made. For one thing, it will bring up a lot of painful memories from that time. Plus, Marlena will either be portrayed as completely evil or out of her mind, and that could damage her reputation as a psychiatrist. Luckily, John has a daughter who can do what it takes to halt production.

Belle Black (Martha Madison) may have been too young to remember when Marlena was possessed, but she won’t want something like that dredged up for everyone to see. Especially if she isn’t certain that there really was a devil. Belle may even try to get Johnny to proceed with his original idea, which was a movie based on Sami DiMera’s (Allison Sweeney) life. Belle may even offer to consult as long as Johnny includes the part where Sami tried to sell Belle on the black market.

Days of Our Lives Spoilers – Johnny DiMera won’t back down.

Although Belle may be able to delay the film, it’s not likely that she has any legal cause to stop it for good. Of course, what nobody realizes yet is that the devil is back inside Marlena once again. And he may not want his secrets out there for everyone to see either. Especially his defeat by John.

Will Johnny finally be able to begin production of his movie? Will John or Belle use legal means to try to stop it? Will the movie somehow cause the devil to reveal himself once again? Literally anything can happen in Salem, so stay tuned to Days of Our Lives airing weekdays on NBC. And don’t forget to check back right here regularly for all your Days of Our Lives news, information and spoilers!