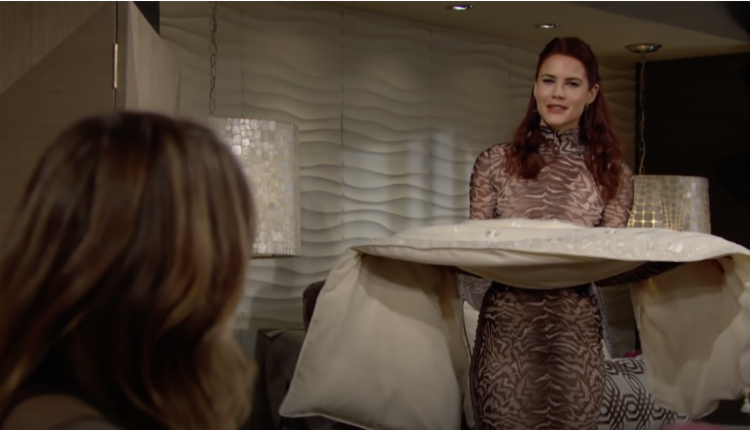 The Young and the Restless spoilers document that Sally Spectra (Courtney Hope) is determined to see Victoria Newman (Amelia Heinle) in the wedding dress she designed. Viewers saw the wink when the dress Lauren Fenmore Baldwin (Tracey Bregman) presented was rejected by the potential Mrs. Locke.

Whether Victoria agrees to add Ashland Locke’s (Richard Burgi) name, which is one he invented, to her famous moniker will soon be known. The mid-October wedding in Tuscany, Italy, has been hyped for weeks. So has the seeming destruction of Ashland’s reputation, which is quickly unraveling.

Young And The Restless Spoilers – Sally Spectra Moves On

No matter what one may think of Sally, she is resilient. After sabotaging herself at Jabot, Jack Abbott (Peter Bergman) and Kyle Abbott (Michael Mealor) had no choice but to remove her from the company.

Along with losing her job, Sally also foolishly trashed the trust she built with Jack. That cost her the romantic potential both people acknowledged and also a friendship. And Jack was one of the few Genoa City, Wisconsin, stalwarts to defend Sally despite her abrasive personality.

Young And The Restless Spoilers – Newman Media Takes The Plunge

Will Adam agree to expand what is supposed to be a media company into the world of fashion? If this were the recent past and Chadam were still in existence, then the answer would likely be yes.

Adam would be open to Chelsea Lawson’s (Melissa Claire Egan) suggestion. But this is Chloe, who he remains unsure of. She is only working for the fashion platform so that Chelsea has a buddy to pair with when she returns from Minnesota.

However, Adam appears to be fond of Sally. Her talent and appeal impress him, with the obvious potential for Ally to form in the future. So, with Sally onboard Newman Media can take the fashion plunge.

Victoria has not experienced what anyone would consider normal preparations for her big day. This marriage was supposed to be about pure love. But the build-up includes suspicion and doubt.

Ashland was seen as the opposite of Billy Abbott (Jason Thompson). Burgi’s character was far more like Victor Newman’s (Eric Braeden). Well, Victoria continues to learn that yes, Ashland does have a deeply checkered past that is similar to her father’s.

So, will she wear the dress that Sally has designed? A good bet would be yes. But the drama leading into the nuptials is and will remain totally soapy.

The Bold and the Beautiful Spoilers: Will Paris Get Back…

Bernice Emanuel Jan 16, 2023
The Bold and The Beautiful

The Bold and the Beautiful Comings And Goings: Rena Sofer Is…