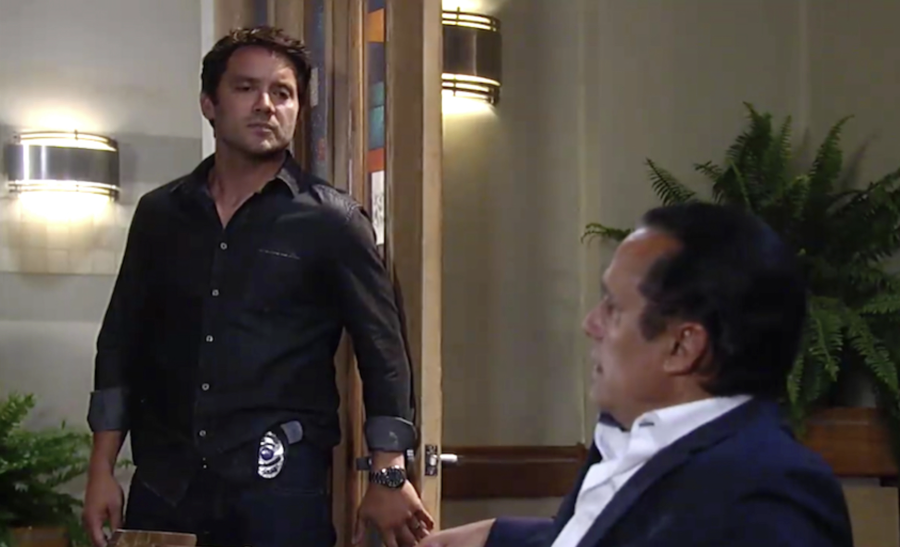 General Hospital viewers will see devastating news hit Port Charles that will bring a crisis with it in upcoming episodes of General Hospital. A visit from a familiar face will bring news of tragedy and turn Laura Collins’ (Genie Francis) world upside down. A crisis will come with it, because the tragedy will impact many lives in Port Charles, but especially Laura’s. Rumor has it that Dante’s ex-wife Lulu Spencer (Emme Rylan) will die, but it could be his ex-father in law Luke Spencer (Anthony Geary) as well! Either death could cause Dante to seek out his father, because Sonny and Luke were the best of friends back in the day!

GH Spoilers – Dante Falconeri May Seek His Father Out Of Grief, Or As The Bearer Of Bad News

General Hospital viewers know that if Lulu dies, Dante may seek out his father out of grief. But if the death is that of Luke, longtime General Hospital viewers will recall Sonny and Luke’s close friendship. Either death would impact Dante, and he would want to tell Sonny what happened. Kevin Collins (Jon Lindstrom) will struggle to get Laura to open up, and that could apply to either death as well. But there is an important clue – Jane Elliot was seen filming at GH, and that means a Tracy Quartermaine appearance – meaning it’s far more likely that it is Luke who’s died.

General Hospital viewers know that especially so soon after the death of Jason Morgan (Steve Burton) Dante would want to tell Sonny of Luke’s death in person. Back in the day, before Jason changed from Jason Quartermaine, med student, into Jason Morgan, mob hit man, Luke and Sonny were best friends. Longtime General Hospital viewers will recall that when the mobster who Luke and Laura went on the run from it was Sonny who took over Frank Smith’s (George Gaines) territory. The death of Luke would impact Port Charles and everyone in it, since Luke was such a part of its history for so long! Laura, of course, and Sonny would be profoundly affected, as would Carly Corinthos (Laura Wright) and Bobbie Spencer (Jacklyn Zeman).

Longtime General Hospital viewers know that Sonny will be devastated at the death of his old friend of many years! Tracy will probably be the familiar face who breaks the bad news to Laura, and soon that news will spread across Port Charles. Dante will learn of the terrible news, and General Hospital viewers can expect Sonny to be devastated when he tells him. During this time, the fallout from the truths revealed at Nina Reeves’ (Cynthia Watros) hearing will also implode Sonny’s marriage to Carly, although this news may bring them closer. Luke was Carly’s uncle, so she also will take the news very hard, as will her mother Bobbie, his sister. Dante will stay close to make sure his father doesn’t spiral!

The Young and the Restless Spoilers: Chelsea Has A New Plan To Get Rid Of Sally

The Bold and the Beautiful Spoilers: Get To Know Ted King And Some Of His Favorite Things

The Young and the Restless Spoilers: Victoria Turns Her Back…

Lisa Rinna Insists That She Sent An Apology To Denise…

Days of Our Lives Spoilers: Zach Tinker Opens Up About His…

The Young and the Restless Alum Gina Tognoni Resurfaces On…