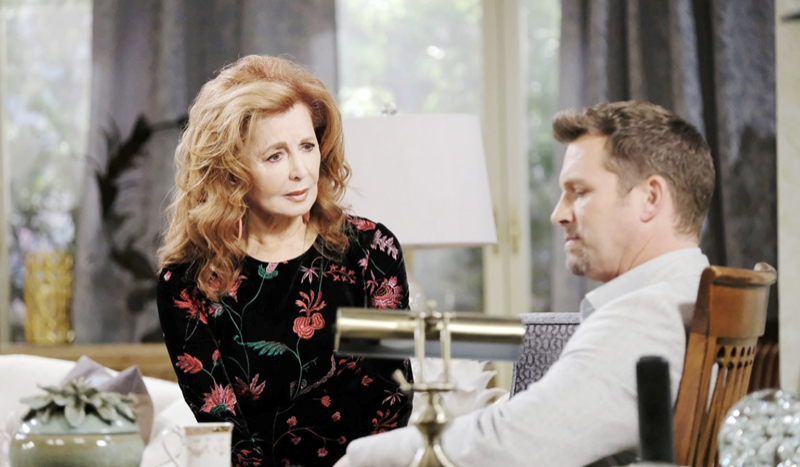 Days of Our Lives spoilers and rumors tease that Maggie Kiriakis (Suzanne Rogers) will step up to help Brady Black (Eric Martsolf) fight the murder charges that have been brought against him in future episodes of Days of Our Lives!

Days of Our Lives viewers will recall that Maggie was in shock when her husband, Victor Kiriakis (John Aniston) told her that his son Philip Kiriakis (Jay Kenneth Johnson) was missing and presumed dead, and that Brady was the main suspect! But Maggie hadn’t learned all the details yet – she hadn’t known about those seven shots of whiskey Brady apparently bought but likely didn’t drink the night that Philip disappeared!

Days of Our Lives viewers will recall Brady mentioning that he’d called Maggie that night when he was upset over Chloe Lane (Nadia Bjorlin) – who was also the one he told that he remembered buying one shot but not drinking it and calling Maggie. Longtime viewers know that Brady has had problems with both drugs and alcohol, and he and Maggie are each other’s Alcoholic Anonymous partners, meaning if either one of them is tempted to drink, or in Brady’s case, use drugs, they call each other for support to help them stay on the straight and narrow! Maggie isn’t sure Brady would have killed Philip or harmed him!

Days of Our Lives viewers know that when Brady mentioned calling Maggie when he was tempted to drink, that is bound to come up in his case. Days of Our Lives viewers will remember that when Brady was tested for drugs and alcohol after being brought into Salem University Hospital, his toxicology screenings came back that his blood alcohol levels were way over the legal limit to drive – at least he didn’t drive down to the riverbank or he’d have a DUI charge as well! Brady’s sister Belle Brady (Martha Madison) stepped up to represent him legally, and got a receipt from Roman Brady (Josh Taylor) showing that Brady apparently bought six additional shots of liquor that night, but as Brady told both Chloe and Belle, he never drank a sip out of that glass.

He paid and went outside the pub where he got a call from his son Tate Black (Colin and Kyle Shroeder), after which viewers will recall Philip came up behind him and knocked him out with a crowbar! Key to the case will be how that liquor got into Brady and when – and who sold it to him! It’s doubtful that Roman did, because Roman is aware of Brady’s alcoholism and he wouldn’t have even sold him the first shot!

Days of Our Lives viewers know that Maggie will step up to help Brady, whether she’s called upon to testify in his case or whether she offers her testimony to Belle. Although it would have been possible that Brady could have gone back into the pub to buy six more drinks and drink them, possibly with downing the first one as well, it’s doubtful. Why would he go and do that when he hadn’t even taken a sip of the first one? Although the testimony of a child – Tate would now be seven years old – would likely not be admissible in court in this instance, it’s possible that he could testify in terms a child would understand that his daddy didn’t sound funny on the phone.

It’s more likely, however that Belle will subpoena the call recording from the cell phone carrier to play in court. That would show that at the time of the call, which could be verified, and compared to the time Maggie left the pub as well, Brady wasn’t drunk then. Someone would have had to have used Brady’s card and somehow forced that liquor into him – the timing of Maggie’s leaving the pub, Tate’s call, and when the additional shots of whisky were purchased will be key to Belle’s defense of Brady! Days of Our Lives viewers know that Maggie will gladly do all she can to help clear Brady, even if it does put her between a rock and a hard place with Victor!

The Bold and the Beautiful Spoilers: Team Brooke or Team Taylor – Has Ridge Already Decided?

General Hospital Comings And Goings: Lindsay Hartley Is Back…