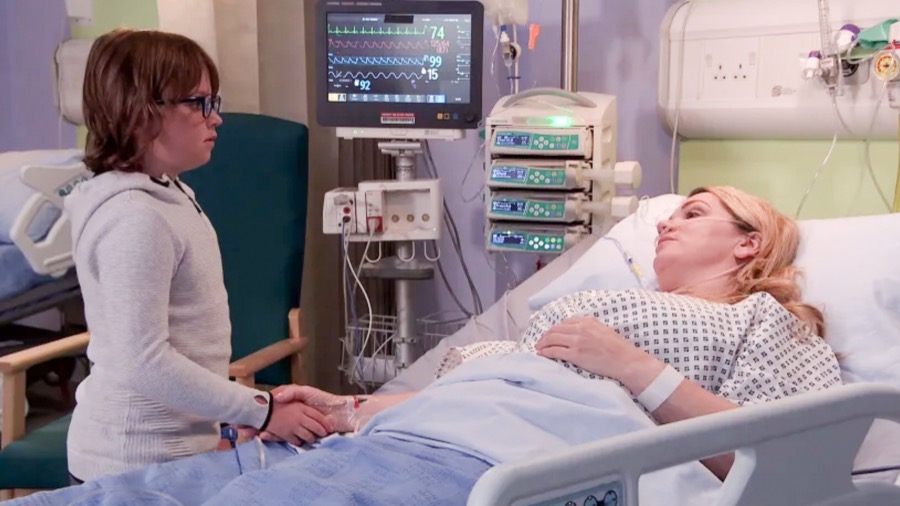 When Leanne knew she’s in danger, she headed back to the flat but Harvey went after her to shoot her. However, it was later revealed that the lifeless body was of Natasha, and not Leanne.

Sam told his father Nick (Ben Price) that he wanted to see her mother for the last time and when they got to the chapel, the child poured out his heart, saying he’s afraid he didn’t make her feel his love.

Leanne is also caught up in the middle as she’s forced to look after Sam when she’s still grieving for late Oliver as Sam told her and Nick that he can’t continue living in the flat where the incident happened.

Danson expressed her amazement to the child actor and fans agreed with her on Twitter: “I work with @JudeRiordan most days and I know how wonderful he is. He has a maturity beyond his years and that [scene] with ‘My Nick’ was absolutely stunning. The two of them have just made me cry.”

Replying to Danson’s post, fans have opened up about their personal experiences of losing a loved one: “I lost my Mum last July and Sam’s words still ring true for me everyday. Such a beautiful and emotional scene.”

“Coronation Street” official Twitter account also shared the exact clip where fans flooded the comment section with praise demanding that Jude should get another reward in the future.

“This broke my heart. Sitting here sobbing. Lost my mum 3 years ago this year and he hit the nail on the head when he said your whole body thinks it’s all a dream and you will see them/text them tomorrow. Great acting #Sam,” a fan tweeted.

“Corrie always brings in the best actors, young Jude will go far on the street I’m sure..he’s a fantastic actor..love Sam but these scenes are heartbreaking,” another one said.

Corrie’s latest alum, Rachel Leskovac also uploaded a video shared by Corrie on Twitter to express her gratitude to all the fans who supported her ever since her return.

“Yes, it’s the end of the road for Natasha Blakeman,” she confirmed.

“I’ve loved every second of it and especially getting to play mum to the fantastic Jude Riordan. I will miss him the most,” she added. Rachel shared a close bond with her on-screen son, Jude, that she revealed she was crying non-stop when they filmed their last scene together.

“I feel really lucky to have been part of the show, and to play a part in its history.”

Days of Our Lives Spoilers: Week of November 1 Preview – Gabi Digs Jake Out of Coffin – Ava Suspect in Homicide