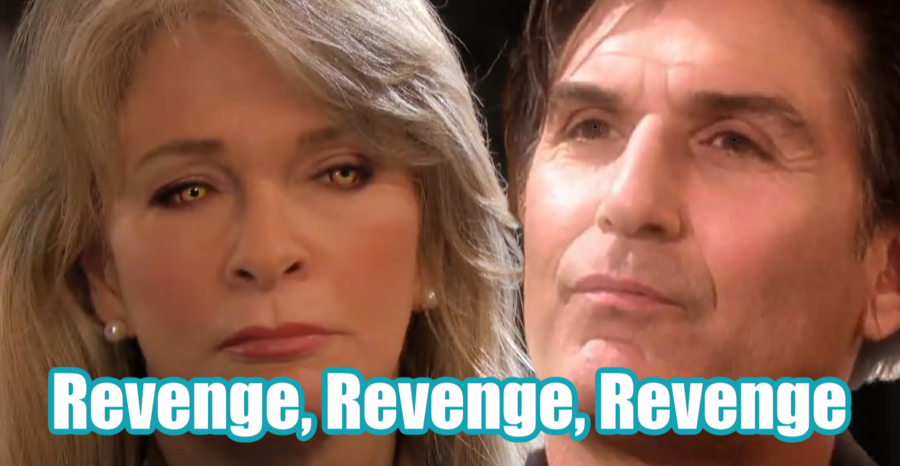 Days of Our Lives spoilers tease that MarDevil (Deidre Hall) will resurrect Deimos Kiriakis (Vincent Irizarry) for revenge on Nicole Walker (Arianne Zucker) in an upcoming episode of Days of Our Lives!

Days of Our Lives spoilers tease that MarDevil – the devil in Marlena Evans – will bring someone back from the dead in the week of November 1-5. Satan in Marlena may well bring several dead Salemites back to life, and Days of Our Lives viewers can expect that all of them will be villains! Longtime viewers will recall that Deimos died without getting revenge on Nicole! Nicole killed Deimos during the amulet drama, and she was under the influence of a drug called “Halo”.

Deimos was the one behind the drugging, which was a mass drugging, but he wouldn’t think of it that way. Deimos was a very ruthless character, nearly on the level of the devil himself. Nicole thinks she is having problems now, but it will be nothing to the problems she’ll be having if Deimos does indeed resurface! Longtime Days of Our Lives viewers know that people coming back from the dead is a pretty common thing in Salem, once a whole island full of folks came back from the dead. But one thing is for certain, and that is Nicole’s past will come back to haunt her; and what better past than Deimos?

Days of Our Lives viewers will recall that John Black (Drake Hogestyn) is tied up and he can’t help prevent satan from bringing Deimos back from the dead, or anyone else for that matter. MarDevil has stashed John in the DiMera crypt, where Vivian Alamain (Louise Sorel) once stashed inconvenient people, and in addition to Deimos, many other dead villains could pop up.

For example, Jordan Ridgeway, (Chrishell Stause) Charlie Dale, (Mike C. Manning) Andre DiMera (Thaao Penghlis) could potentially pop up to create havoc! Days of Our Lives viewers know that satan will only bring back the worst of the worst, the ones who will obey him. It doesn’t seem like another Stefano DiMera (Joseph Mascolo) iteration is in the cards, but one never knows! If the Phoenix is alive anywhere, perhaps satan will find him another body this time instead of Dr. Wilhelm Rolf (William Utay)! However, even though John can’t help there is someone who might be able to save Nicole from undead Deimos – Rafe Hernandez (Galen Gering)! It would be just the thing to push them into each other’s arms, if it doesn’t happen even sooner!

Days of Our Lives viewers will recall that Rafe and Nicole have had a difficult time staying away from each other even though Rafe seems committed to Ava Vitali (Tamara Braun). But he might dump her like a hot potato if he finds out she’s been doing mob stuff behind his back like “handling” Carmine Merlino (Richie Stevens) for instance.

Or, maybe her undead son Charlie might take care of her if satan brings him back to life and problem solved! Days of Our Lives viewers know that EJ would be of no help to her at all should Deimos reappear and threaten her – he’d be more likely to run into the DiMera wine cellar and hide! He’d be no match for Deimos Kiriakis! Rafe would be the most likely to act as Nicole’s knight in shining armor and dispatch the dead Deimos who’s not so dead so he returns to being dead!

The Young And The Restless Spoilers: Victor Supports Grieving Abby, Sends His People To Look For Chance?

Bernice Emanuel Apr 25, 2022
The Bold and The Beautiful

Taylor Hancen Rios Oct 27, 2021
The Bold and The Beautiful