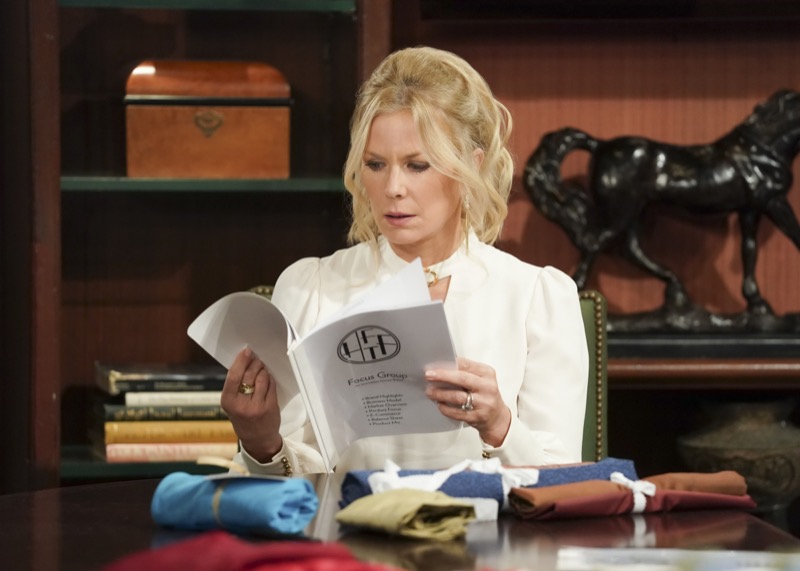 The Bold and the Beautiful spoilers document that Brooke Logan Forrester’s (Katherine Kelly Lang) decision to let Ridge Forrester (Thorsten Kaye) go is teased to be reversed. She will continue to pursue the man she loves more than any other.

Brooke might be provided with information or happen to gain it. Either acquisition would radically alter everyone’s perception of reality. In the meantime, she and Ridge will remain conflicted.

Taylor Hayes (Krista Allen) was in her room at the cliff house when Ridge arrived at what is now his home. He returned from another emotional meeting with Brooke and later passionately kissed Taylor.

Neither Ridge nor Brooke is mad at each other. Instead, both feel a sense of mixed sadness and inevitability. They naturally believe that Brooke’s seeming pattern of sabotaging their relationship has repeated.

So, thinking that Brooke’s instability has been reinforced, Ridge has returned to Taylor. Rebound might be a more apt word to apply at this point in the plot.

Brooke has cried a lot since New Year’s Day. She woke up and saw the smiling face of Deacon Sharpe (Sean Kanan).

Good morning, sunshine. That moment offered some comic relief to what was a disastrous scenario.

Brooke thankfully learned that she and Deacon did nothing more than sleep aside from each other. Deacon being on Ridge’s side of the bed reinforced the rage Kaye’s character later released as he repeatedly punched his perceived rival at Il Giordino.

Bold And The Beautiful Spoilers – Deacon Sharpe Sees An Opportunity

Deacon sat in his prison cell, hoping to establish a relationship with his daughter. That goal has been realized with Hope Spencer (Annika Noelle).

But Deacon also intended to make his feelings known to Brooke. He did not anticipate that she would be available. Now, as a result of their night into the next day together, it appears as though he has an opportunity.

Brooke will make a push to reconcile with Ridge. He seems set to revive his connection with Taylor. And, everyone is bound to learn about the role Sheila Carter (Kimberlin Brown) played in orchestrating this drama.

But will Deacon realize false hope about revisiting a romantic connection to the woman he loves, or might Brooke be unable to reconcile with Ridge, no matter what facts are learned?

Days of Our Lives Spoilers: Xander Is Forced To Come Clean…

Bernice Emanuel Dec 28, 2022
The Young and The Restless

The Young and the Restless News: Are Doug Davidson’s Fans…

Days of Our Lives Spoilers: Steve Burton Is Excited To Join…