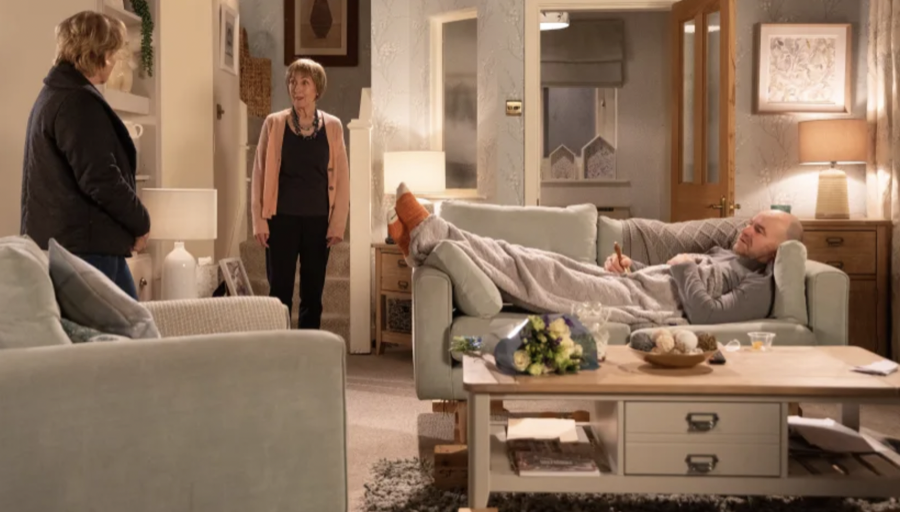 Coronations Street spoilers have revealed that Sally Metcalfe is about to make a huge sacrifice by letting go of her political goals to focus more on her husband’s recovery after a damaging article tainted her image.

Sally (Sally Dynevor) is only a moment away from spiraling down for she just knew about her husband’s Tim (Joe Duttine) deteriorating heart issue and episodes next week will see her placed in a bad light when a damaging article is published in the Weatherfield Gazette.

Aside from Sally being preoccupied about the upcoming elections, Tim also didn’t want to burden her wife about his need for a triple bypass surgery that he opened up to nurse Aggie Bailey (Lorna Laidlaw) about his doubts and fears instead. But this created a rift between the couple after Tim declined Sally’s numerous invitations to be intimate, leading her into suspicion he’s having an affair with the nurse.

When Sally found out about his actual condition and his friendship with the nurse, she was heartbroken and felt betrayed, but Tim passed out and was rushed to the hospital.

Next week, the story will pick up with Tim asking Kevin (Michael Le Vell) to relay his message that he’s very sorry and that he loves her very much.

Just when Tim lies in bed ready to undergo the procedure, he hears a commotion in the hospital corridor as Sally is arrested by a police officer but it will become a hazy memory for him as the anesthetics take effect. What could be the reason for Sally’s arrest?

Sally will receive another heartbreaking news as the developers will back out from supporting her for the local council after the article was published. This issue branches to more troubles because Faye (Ellie Leach) suspects one of Sally’s rivals might have provided the picture to ruin her image in the election campaign.

Overwhelmed by her emotion, Sally is convinced Maria (Samia Longchambon) is the person to be blamed and this leads her to commit another mistake she’ll regret. She takes vengeance against the candidate by sending a picture of Maria with her 4×4 gas guzzler. However, it is revealed by Maria that Councillor Cameron was the one who sent Sally’s damaging picture.

Tim’s mother Elaine Jones (Paula Wilcox) also comes into the picture but her ideas of celebrating her son’s birthday will clash with Sally’s, which will see them disagree. She’ll also be living with them under the same roof to help look after Tim but this is another burden to her daughter-in-law.

As Sally faces this series of hardships, she tells Tim she’s reflected on dropping from politics to focus on him instead. Is Sally sure about her decision?

Bernice Emanuel May 6, 2022
The Young and The Restless

The Young And The Restless Comings and Goings: Heather…