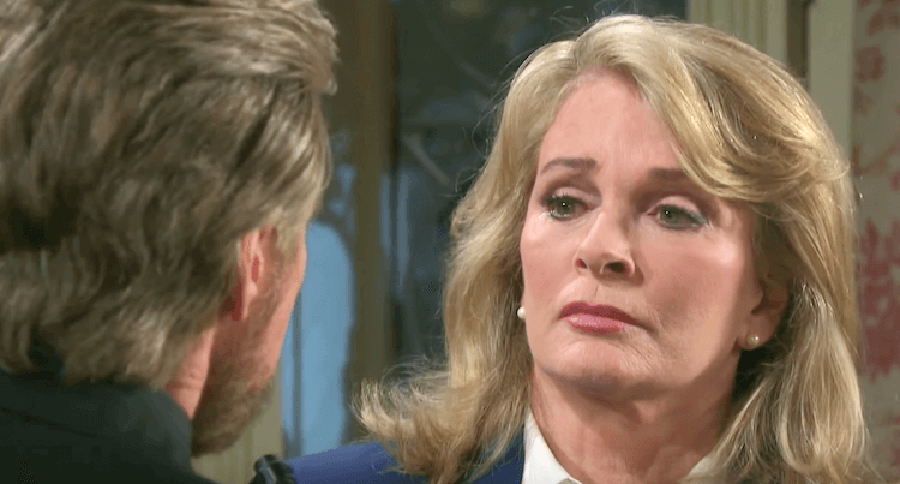 Days of Our Lives (DOOL) spoilers tease that thanks to Father Eric Brady (Greg Vaughn) and the rest of her family, the devil has left Dr. Marlena Evans (Deidre Hall). But the Devil did a lot of damage in Marlena’s name, and she will find it difficult to readjust to life, particularly when dealing with people that the Devil harmed. While most people will try to understand that Marlena wasn’t herself, there may be a few people who will make it a point to avoid Marlena.

Days of Our Lives Spoilers – Doug Williams and Julie Williams will have a hard time even looking at Dr. Marlena Evans!

Arguable, Doug Williams (Bill Hayes) suffered the most at the hands of the devil. But Doug was actually possessed first and the whole reason that Marlena let the demon back in, was so that he would leave Doug alone. But Marlena knew that Doug would reveal the truth about the possession so she had him committed and drugged. All visitors were restricted, including his wife Julie Williams (Susan Seathford Hayes). But Julie could tell something wasn’t right with Marlena and she even took her to court to get her removed as Doug’s doctor. The ploy worked and Doug came home on Thanksgiving. When Marlena showed up to take him back to the hospital, Doug was lucid enough to reveal she was actually the devil!

DOOL Spoilers – Julie Williams knows that Dr. Marlena Evans was possessed but will still not trust her!

Julie will certainly have a hard time being around Marlena. Although Julie knows Marlena wasn’t acting on her own volition, she won’t easily forget how Marlena kept her apart from Doug for months. Part of Julie will always wonder if the devil is actually gone. Marlena will be hurt by her friends rejection, but will understand given the things the devil did. Unfortunately, Julie won’t be the only one having a hard time. Belle Black (Martha Madison) was also targeted by the devil. As much as she wants to be able to just see her mother when she looks at Marlena, she won’t be able to keep from seeing the devil as well.

Days of Our Lives Spoilers – Dr. Marlena Evans will eventually regain her friends and families’ trust!

But as time goes by, even the people who the devil hurt the most will see that Marlena is herself again. But it will be a difficult time and Marlena will have hate that some of the people she cares for the most can’t even look at her. It will be a long adjustment, but eventually people will forget and Marlena will once again be held in the highest standards in all of Salem.

Will the people that Marlena harmed while possessed be able to completely trust her? Will people like Julie and Belle purposely avoid Marlena? How will Marlena will back her friends and family? Anything can happen in Port Charles so stay tuned to General Hospital airing weekdays on ABC. And don’t forget to check back right here regularly for all your Days Of Our Lives news, information and spoilers!

The Young and the Restless Spoilers: Team Abby and Chance Or Team Devon?

Days of Our Lives Spoilers: Sonny Gives Leo The Boot –…

Bernice Emanuel Jan 18, 2023
The Bold and The Beautiful

The Bold and the Beautiful Spoilers: Katie Gives Hope a Much…

Bernice Emanuel Sep 8, 2022
The Young and The Restless

The Young and the Restless Spoilers: Billy Abbott’s Next…