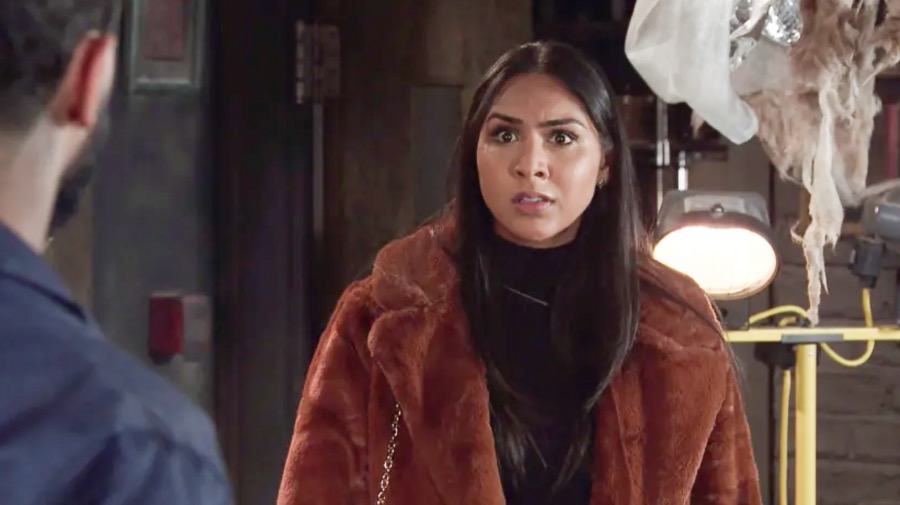 Coronation Street spoilers have teased a comeback for estranged couple Zeedan Nazir and wife Marrium after her father Hashim’s death, in which she’s unaware Zeedan played a major role.

Zeedan (Qasim Akhtar) thought he’s finally free from trouble when the villain and his father-in-law Hashim Elamin (Vincent Ebrahim) died due to a heart attack when his plans of burning Speed Daal backfired.

However, the incident caused more drama as Zeedan’s estranged wife, Marrium (Kiran Landa), returned to Weatherfield. But instead of seeking the truth for her father’s demise, Marrium will find love instead.

Marrium arrived when Zeedan was redecorating the restaurant after the fire incident, and told her about how Hashim died, except of course that they let him die after threatening them for months out of their money-laundering scheme.

When they meet again in Victoria Garden, the couple bares their souls, saying how they miss each other which ends with a kiss. Overwhelmed by his emotions, Zeedan confesses he still has feelings for her and asks her outright to give their marriage another go, to which Marrium responds in his favor. Can Zeedan handle the consequences later?

‘Coronation Street’ – Zeedan and His Seris of Lies

After Speed Daal received its insurance for the fire incident, Yasmeen (Shelley King) and Stu (Bill Fellows) prepare the restaurant for its reopening, and Zeedan’s sister Alya Nazir (Sair Khan) senses that the newcomer will be another problem to the family.

Zeedan assures her they’ll get rid of her sooner for Marrium will be back in London. But in reality, Marrium contemplates moving to Manchester after rekindling marriage with Zeedan. How will Alya respond?

Corrie viewers knew it was Alya who stopped Zeedan from calling an ambulance to revive Hashim in order to pin him for arson and now that Marrium will be staying near the family, will Alya successfully act innocent? Or will her guilt betray her?

Corrie actor Qasim Akhtar has previously spoken about his on-screen character Zeedan and teased the viewers they will see another side of him as his ex-wife Marrium comes into the scene.

“It is interesting to meet her as he made some terrible mistakes in the marriage and cheated on her, but it quickly becomes evident that he still loves her,” he told Digital Spy.

The actor who’s unaware of the full plot admitted he’s intrigued to see where the story is leading but is also certain there are “lots more twists and turns along the way.”

With Marrium closer to discovering the truth, can she handle another heartbreak?

The Bold and the Beautiful Spoilers: Here’s How Sheila Really Feels About Deacon

Bernice Emanuel Dec 14, 2021
The Young and The Restless

Bernice Emanuel Dec 18, 2021
The Young and The Restless