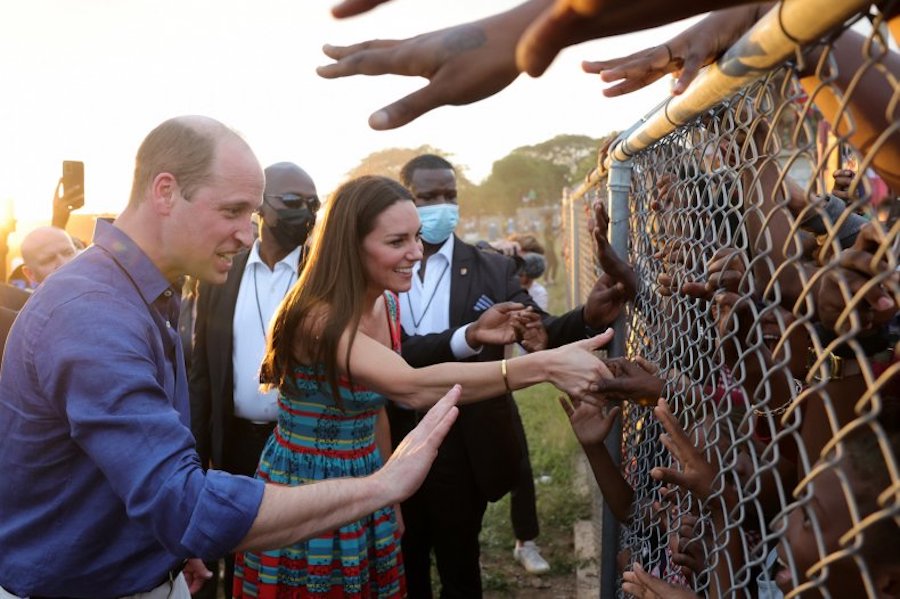 British Royal News says that whoever is working on Prince William and Kate Middleton’s PR team might want to either take a break or a real nice, long vacation because there’s no doubt that there’s a wave of criticism coming their way. There are new reports that suggest the Duke and Duchess of Cambridge’s trip to Jamaica has been seen as nothing short of a disaster, as one video sees Kate recoiling away from Jamaica’s Minister of Culture, Gender, Entertainment & Sport, Olivia Grange while another shows William & Kate saying hello and shaking hands to people standing behind a metal fence. Here’s what you need to know.

While some critics believe that the videos and photos can be interpreted in different ways, others think that this has turned out to be a PR disaster that could have easily been avoided. Royal expert and author Omid Scobie shared his thoughts about the matter on Twitter when he wrote, “I do wonder what the hell palace organizers were thinking with some of yesterday’s photo moments. The planning and recon that goes into every step of these engagements is next level, so how did no one think to avoid certain imagery? This is why diversity on a team matters.”

Of course, it didn’t take long at all for other royal fans and critics to weigh in on the matter, too. Many of them wrote, “But this seems to be the norm with the powers that be at the palace. The critical thinking and looking at the big picture has completely gone out the window. It was completely displayed with the way it handled the situation with H&M from the kick off!” along with, “What the hell are Will & Kate doing in these countries in the first place?! Surely The Firm can’t be so tone-deaf about colonialism. I hope no one visits Canada this year!”

If that weren’t enough, protestors in Jamaica raised their fists Tuesday as they donned T-shirts emblazoned with a pair of shackled Black wrists right before William and Kate arrived.

Another fan wrote, “It was a missed opportunity to meet with protesters and get a conversation going but alas it’s not surprising as KP and BRF always preferred appearances to substance. It was a waste of time and let’s say Catherine is not doing to well either.”

The Young and the Restless Spoilers: Abby And Chance’s…

Destiny Dukes Nov 6, 2021
The Bold and The Beautiful