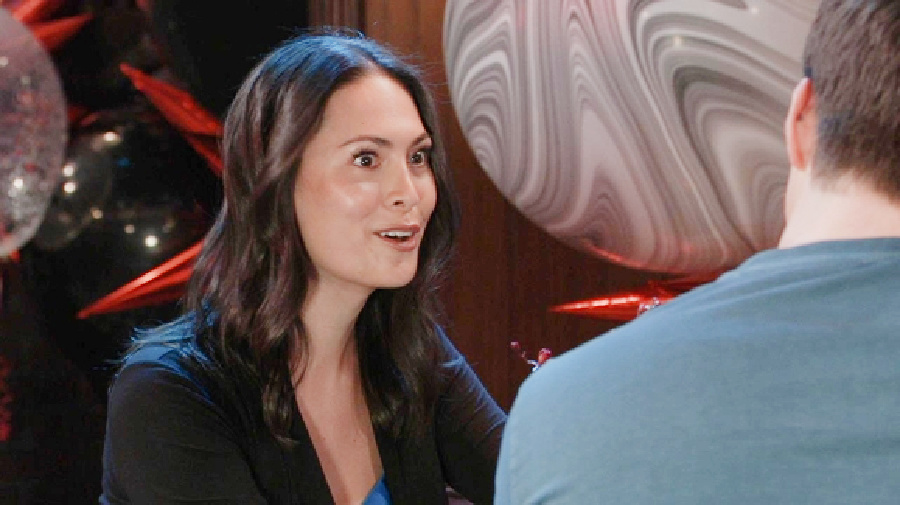 General Hospital Spoilers – The Hazards Of Online Dating With No Photographs

General Hospital viewers will recall Terry describing the dating app that Portia Robinson (Brook Kerr) had set her up with to good friend Nurse Elizabeth Baldwin (Rebecca Herbst). General Hospital viewers saw Terry talking to Elizabeth about her first date that night with someone she’d connected with on the app, and that the app didn’t allow photos. The idea was to get to know the person from the inside out, instead of from the outside in, the idea being that looks could be deceiving, which in many cases can be true.

Terry is meeting the man at Charlie’s Pub, and was told he would be sitting at the bar and wearing a teal shirt and Chet sits down by her in a blue shirt. Charlie’s Pub has been all decorated up for Valentine’s Day but with a little snark, but otherwise acceptable – Phyllis Caulfield (Joyce Guy) had explained to Sonny Corinthos (Maurice Benard) earlier that Lenny Caulfield (Rif Hutton) hadn’t liked Valentine’s Day!

GH Spoilers – Teal Is In The Eye Of The Beholder?

General Hospital viewers know that in the eyes of someone artistic, like Elizabeth, there are different shades of blue, and teal is not what Chet is wearing – it’s powder blue. Terry is wearing a cobalt blue dress made out of shiny satiny material with a black jacket, and when Chet sits down next to her, she assumes that he is her date because he’s wearing the only blue shirt of any shade there! General Hospital viewers will see Terry tells her presumed date that she is excited to finally meet him, confusing Chet, who blurts out, “Uh, finally”?, and Terry continues, telling him that she can see now that she had no reason to be nervous. Chet tells her going out solo on Valentine’s Day can be nerve wracking, but Charlie’s Pub is pretty non-threatening, and Terry supposes so, saying she’d only been there a few minutes and started wondering if he was going to show.

General Hospital viewers will see Terry continue talking about wondering if he was going to show up and he flirts a little, asking if she means as in where he’d been all her life? Terry clarifies, telling Chet as in where he was five minutes past the hour, because she didn’t see anyone in a teal shirt and she thought maybe she had been stood up! General Hospital viewers then see Chet verify that Terry was looking for a guy in a teal shirt, and she jokes she figured shining armor might be a little too blingy, but is glad they decided to meet up in person.

Chet tries to interrupt but she continues talking, saying she was wary of the dating app too, thinking it was a little wacky trying to connect to someone with no photos, then tells him meeting him had made her a believer – calling him “Tanner”. Chet explains he’s not Tanner, Terry looks embarrassed – her Tanner comes up behind in a royal blue suit and tells her their table’s ready!

The Young and the Restless Spoilers: Victoria’s Love For Ashland Overcomes All – But Not For Long

The Bold and the Beautiful Hits A Ratings High: All Thanks…

Bernice Emanuel Apr 13, 2022
The Bold and The Beautiful

The Bold and the Beautiful Spoilers: Is Jacob Young…