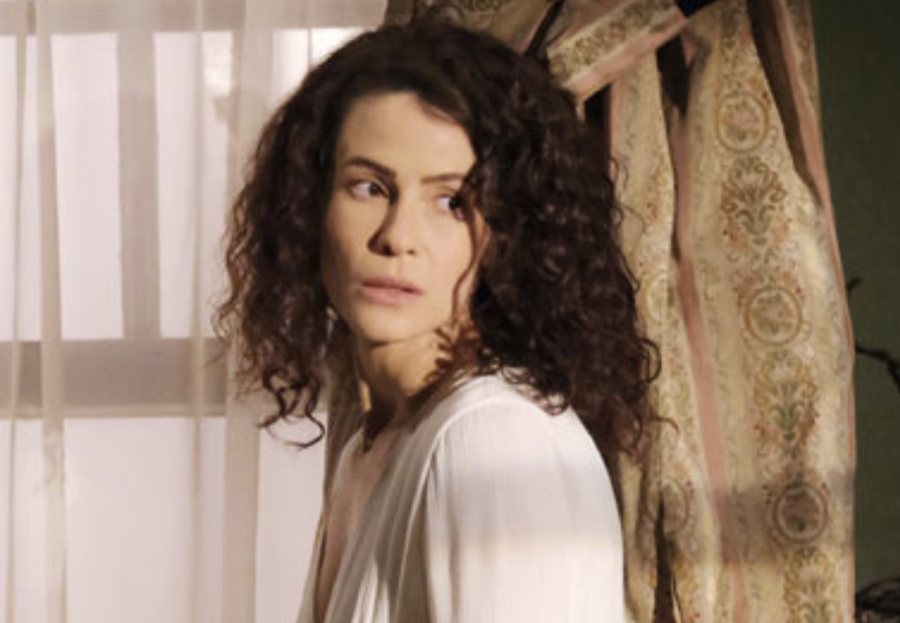 Days Of Our Lives (DOOL) spoilers tease that Sarah Horton (Linsey Godfrey) may not be in her right mind, and viewers will find out in future episodes of Days of Our Lives!

Days of Our Lives viewers will recall that when Kristen DiMera (Stacy Haiduk) abducted Sarah and shipped her off in a steamer trunk, she was injected with a syringe! Days of Our Lives viewers will remember that it was a syringe of the same thing Abigail DiMera (Marci Miller) ingested in a drink that made her psychotic! Abigail was in the psych ward for over a year before she was normal again; Sarah doesn’t seem her normal feisty self – in fact, many viewers have noticed she seems almost in a dream world. Kristen seems to treat her like a small child as well, and Sarah relates to her in a childlike manner as well. Is Sarah in her right mind or is she in a psychotic state?

Days Of Our Lives Spoilers  – Who Is Sarah Horton Talking About?

Days of Our Lives viewers will recall Sarah looking out the window into the tropical scenery and talk about someone who needs her, someone she needs, a male someone. Days of Our Lives viewers assume she’s talking about Xander Cook (Paul Telfer) but who else might she be talking about – some viewers think she could have been pregnant and she’s talking about a baby. But where would the baby be; surely if she’d had a baby on the island Kristen would have took good care of the baby. Kristen may be a lot of things, but she won’t hurt a baby or a child; might Sarah have miscarried on the island if she were pregnant? Considering the strong psychotic drugs that she was injected with, chances are if she had been pregnant the baby would have been affected!

DOOL Spoilers – Is Sarah Horton In A Fantasy World?

Days of Our Lives viewers will remember Sarah as a feisty gal who won’t put up with anyone’s crap, but she’s acting like Kristen is her mother! If there was nothing off with Sarah mentally and emotionally she would have tried to fight her way home long ago! When Abigail ingested the same substance that Sarah got straight into the bloodstream, she started hallucinating; she thought Chad DiMera (Billy Flynn) was trying to kill her! Abigail had one drink – Sarah had a whole syringe injected into her, and Days of Our Lives viewers will remember how she acted before she passed out! There is a very strong possibility that the substance damaged Sarah mentally and emotionally enough that Sarah simply isn’t Sarah anymore, but there is also the possibility that Kristen has brainwashed her.

Days Of Our Lives Spoilers – Will Sarah Horton Ever Be Herself Again?

Days of Our Lives viewers will recall that Sarah hasn’t exactly been receiving psychiatric care while she has been a prisoner on Kristen’s island; although at least she isn’t in a coma! It took months for Abigail to recover and that was while in a psychiatric facility where she received antidotes for the psychotic drugs she had ingested by mouth. Days of Our Lives viewers want to know even if Sarah is rescued and brought back home, will she ever be herself again, or has permanent damage been done? If she has been brainwashed, what will it take to reverse that so that Sarah is the Sarah her loved ones remember?

Be sure to catch up on everything happening with DOOL right now. Come back here often for Days of Our Lives spoilers, news, and updates.

The Bold and the Beautiful Spoilers: Hope Decides Deacon…

The Young and the Restless Alum Justin Hartley To Star In…

Bernice Emanuel Dec 19, 2022
The Young and The Restless

The Young and the Restless Alum Shemar Moore Is A New Dad!…