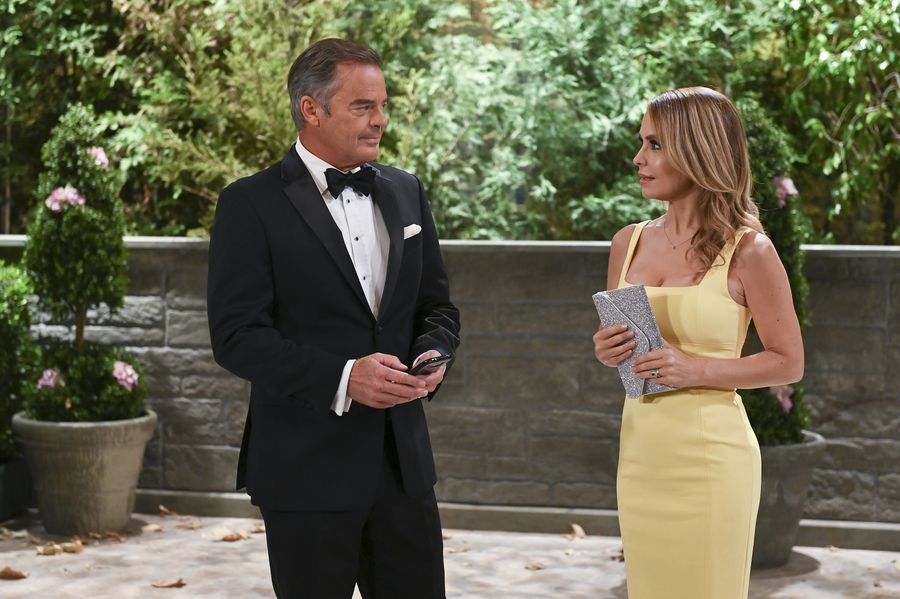 It’s been quite a while since Olivia learned that Ned cheated on her with a drunk Alexis Davis (Nancy Lee Grahn) while she was off trying to solve crimes with Robert Scorpio (Tristan Rogers). Tracy Quartermaine (Jane Elliot) did her best to keep that secret from being revealed, but somehow these things always have a way of coming out in the end.

Olivia dumped Ned but decided to continue living in the Q mansion. After all, it’s a pretty big house and they could have their own separate quarters and never have to truly be with one another. Of course, Ned and Olivia saw each other all the time and he was the one who had to convince her that Leo had all the signs of autism and she needed to take that seriously and have him evaluated.

Ned’s concern for her son and the way he could just tell what was going on with Leo endeared Ned to Olivia forever and now it’s time they renew their vows.

General Hospital – A Sweet Ceremony With Lots Of Guests

For a soap wedding during Covid, this vow renewal will have a lot of people on the set to cheer Ned and Olivia on, including Carly (Laura Wright) and Sonny (Maurice Benard), Michael (Chad Duell) and Willow (Katelyn MacMullen), Brook Lynn (Amanda Setton) and Monica (Leslie Charleson), and even Maxie (Kirsten Storms) and Tracy. That’s a lot of people and actor Wally Kuth said in the February 8, 2022, issue of Soap Opera Digest that he couldn’t be happier than how it all turned out.

“The ceremony is great,” Kurth said. “It’s short and sweet. It’s not long, overwrought vows, it’s actually quite sweet and funny. I thought it was very well done.”

There’s even a moment between Ned and his mother that Kurth absolutely loved. “She tells Ned that she’s happy for him and Ned expresses his sympathy over losing Luke. I think Ned and Tracy have gotten closer and it’s the two characters saying goodbye to each other once again.” Stay tuned to General Hospital weekdays to see how this wedding plays out.

The Bold And The Beautiful Jacqueline MacInnes Wood Shows Instagram How Her Adorable Kids And Pets Live Their Best Lives!

Taylor Hancen Rios Mar 21, 2022
The Young and The Restless

The Young and the Restless Spoilers: Adam Newman Is Keenly…