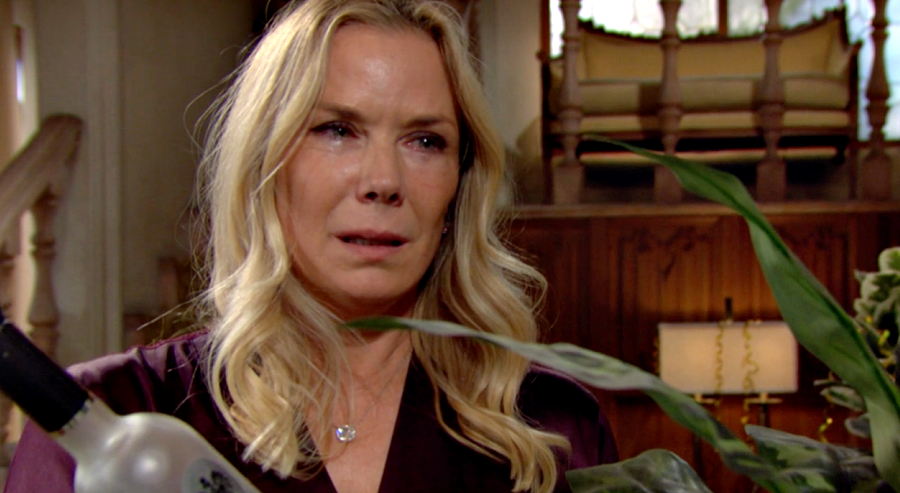 The Bold and the Beautiful spoilers document Deacon Sharpe (Sean Kanan) is glad to be making progress with Hope Spencer (Annika Noelle) and through her, Liam Spencer (Scott Clifton). While his son-in-law remains vigilant, he also has begun seeing what Hope continues to reinforce about her dad.

However, Douglas Forrester (Henry Samiri), who Liam recently referred to as Dougie, accidentally saw something that is already impacting Deacon’s world. Samiri’s character recalled seeing what he thought was Santa Claus kissing his grandmother on New Year’s Eve. Of course, that was Deacon in a Santa hat kissing Brooke Logan Forrester (Katherine Kelly Lang).

Bold And The Beautiful Spoilers – Deacon Sharpe Should Have Stopped Brooke

Instead of taking the vodka bottle away from Brooke, Deacon enabled her by going along with the downing of shots. That impulsive decision proved to be a game-changing moment.

Brooke had no idea that she was drinking real alcohol, instead of the fake stuff, on New Year’s Eve. Deacon was not sure why the non-alcoholic champagne caused Brooke to be tipsy. But he surely knew that her use of vodka was wrong.

Deacon was not looking out for Brooke and gave in to his weakness with alcohol. Those in-the-moment decisions are already haunting him.

Bold And The Beautiful Spoilers – Brooke Logan Forrester Can Not Continue

Brooke can not allow Deacon to continue being around her. The access she allowed to her house was a risky bet, to begin with, based on Ridge Forrester’s (Thorsten Kaye) strenuous objections.

It has proven to be dangerous for Deacon to be around. Brooke and Deacon drinking together and kissing confirmed Ridge’s feelings that trouble was bound to happen.

So, telling Deacon that he can no longer be in her house could be the start of a downfall storyline.

Deacon believes that Brooke is the love of his life as well. But she is taken, which is igniting conflict.

Ridge is very protective of Brooke. That is natural since she is the love of his life. So, he will take charge of this situation as soon as he learns the facts.

Kaye’s character will take charge as soon as he learns the facts in this situation. Major problems project for Deacon, who will have no way to explain his actions.

Sheila Carter (Kimberlin Brown) is the source of the developing drama. She set these problems in motion. While not knowing that Deacon would become as entangled as he is, Sheila’s jealous feelings about his progress are noteworthy and are sure to be revisited on B&B.

Soap Spoiler is a leading source for everything linked to The Bold and the Beautiful. Check back regularly for B&B spoilers and news!

The Bold and the Beautiful Spoilers: Will Brooke Confess The Truth About That Kiss?

Bernice Emanuel Apr 8, 2022
The Young and The Restless

The Young and the Restless News: Is Sharon Case Taking A…

Bernice Emanuel Jan 28, 2023
The Young and The Restless

The Young and the Restless Spoilers: Phyllis Goes Face To…

The Bold and the Beautiful POLL: Are Steffy And Thomas Right…