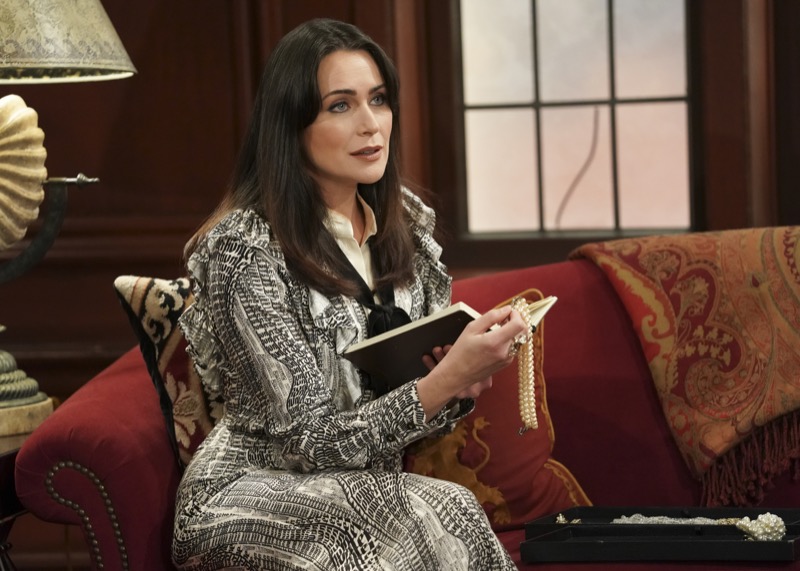 General Hospital spoilers tease the Quartermaine residence has been missing its boisterous drama ever since the dust settled from Austin Gatlin-Holt’s (Roger Howarth) daddy drama, and Maxie Jones’ (Kirsten Storms) and Brook Lynn Quartermaine’s (Amanda Setton) baby switch fiasco. Tracy Quartermaine (Jane Elliot) fled the country after her brush with law enforcement following her partner, Luke Spencer’s (Anthony Geary) alleged death. Olivia Quartermaine (Lisa LoCicero) has become hyper-focused on her son, Leo Quartermaine’s (Easton Rocket Sweda) needs since his diagnosis of Autism Spectrum Disorder. So, who can inject a little passion back into this family? No one could do it better than Lois Cerullo (Rena Sofer)!

The Backstory on Ned and Lois

Ned Quartermaine (Wally Kurth) and Lois had a tumultuous love affair both on- and off-screen. The pair produced fireworks in Port Charles with their Brooklyn wedding while actually getting engaged, married, and having a daughter together in real life.

Ned wasn’t quite as transparent in his younger days. Going by two different names and living two very different lives, he married Lois under his persona of Eddie Maine — the rockstar they both wanted him to be. But he also married Katherine Bell — albeit blackmailed against his will — as Ned Ashton, and Lois knew nothing of that life. It all came to a halt when Katherine threw Ned a birthday party, and Lois jumped out of his cake announcing she too was his wife. In the end, the wild and crazy
pair fell deeper in love and had a real wedding — with their real names — their love didn’t last.

So what happened? Lois and Ned both found out they wanted the same thing — power, wealth, and fame — but in very different formats, and with Lois as Ned’s music agent. Both equally determined to get what they wanted, they lost sight of what really mattered: family. While Lois has remained off-screen and living life in Brooklyn, New York, Ned has continued to struggle with priorities — often placing the family business, ELQ, ahead of his wife and children. The same behavior that cost him Lois has already cost him his wife (and longtime friend of Lois), Olivia, too.

Lois and Ned’s daughter, Brook Lynn, took after her dear old dad and wanted to be a musical superstar. She nearly made it and garnered some fame on her way to the top before Nelle Benson-Jerome (Chloe Lanier) slashed her throat, causing her to lose her ability to sing. Brook Lynn’s latest love interest, Harrison Chase (Josh Swickard), has joined her in a plan to take down the shady producer that stole Brook Lynn’s songs — Linc Brown (Dan Buran), and Chase is starting to show signs of preference for their relationship than revenge. But Brook Lynn is a lot like her dad, and she may not give up on corporate justice so easily. If her mom came back to town to really see Brook Lynn and Chase in action, she might have a lesson or two to pass on before Brook Lynn had to learn the hard way.

Lois was mostly loved by all, and her reputation remains untarnished, but what would her friend Olivia say about Ned’s ex returning to town? Would she take up one of the many currently empty rooms at the Quartermaine mansion, or are those quarters just too close? Might Lois’ comments about Brook Lynn’s behavior toward Chase mirroring how Ned treated her make Olivia feel like Lois isn’t over it? Would Ned’s replies defending himself make her feel like he isn’t either? GH fans would love nothing more than a Ned and Lois reunion of some kind!

Knowing Rena Sofer and Wally Kurth were once married in real life might make it difficult for them to engage in any sort of on-screen love affair now. Not many divorceés out there are looking to pucker up for their ex again in this lifetime. But come on guys, do it for the fans!

Keep checking back with us for more General Hospital news and spoilers on this storyline and others.

General Hospital Star Kirsten Storms Shares A Photo Of Her…

Bernice Emanuel Apr 28, 2022
The Young and The Restless

The Young and The Restless Spoilers: Will Nate and Victoria…