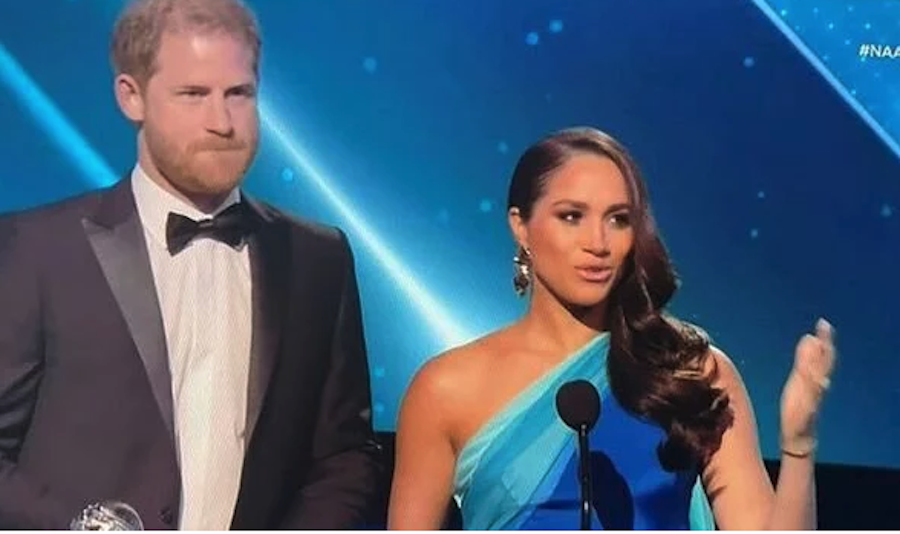 British Royal News says that while accepting the President’s Award at the NAACP Awards over the weekend, Prince Harry looked like he wanted to be anywhere but there. In contrast, his wife Meghan Markle was totally in her element. At least, that’s what one body language expert has to say! Here’s what you need to know.

The Duke and Duchess of Sussex were on hand to collect their NAACP President’s award at the NAACP Awards, where they also paid tribute to the Ukrainian people, amid their ongoing fight with Russia’s military invasion

During his part of the couple’s acceptance speech, Harry said, “Before I begin, we would like to acknowledge the people of Ukraine who urgently need our support as a global community. I think it’s safe to say I come from a very different background to my incredible wife, yet our lives were brought together for a reason. We share a commitment to a life of service, a responsibility to confront injustice and a belief that the most overlooked are often the most important to listen to.”

And while Harry sounded like he was grateful to be accepting his award, body language expert Dr. Lillian Glass said that his physical movements told a whole different story.

She put it this way, “Harry looked like a fish out of water as he didn’t know what to do or how to comfort himself as he looked down at the award and examined it and then rocked back and forth and pulled away from Meghan.”

Dr. Glass added, “He straightened up for a while when she quickly turned her head towards him and shot him a not so pleasant look indicating that he was on stage and to be aware of it and to shape up. He purses his lips in embarrassment and then cocks his head like a wounded puppy and then looks at the camera. He is not smiling the whole time he is up there. He then forgets and looks back at her and looks down and then returns to facing the camera. While looking at the camera he continues to rock back and forth like a child that feels uncomfortable because they have a full bladder.”

If that weren’t enough, Dr. Glass continued, “Meghan on the other hand is in her element as she looks directly into the camera and speaks eloquently. One would think that growing up in front of a camera and having spoken to countless groups he would know how to act when receiving an award on stage but it confirms that the body doesn’t lie and Harry is clearly not happy and uncomfortable as indicated through his body language at this event.”

The Young and the Restless Spoilers: Richard Burgi’s…

British Royal News: Gayle King Gets Slammed For Being The…