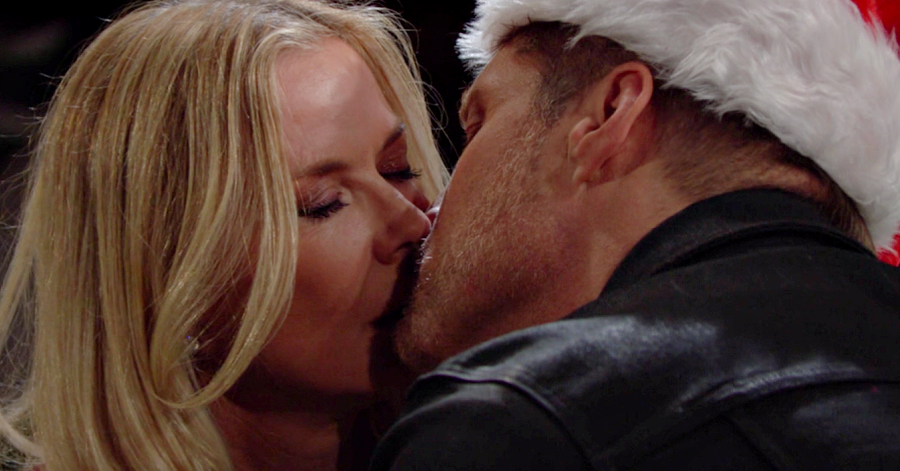 The Bold and the Beautiful spoilers document Douglas Forrester’s (Henri Samiri) desire to regain his favored stuffed animal led to a looming reveal. A parentless late-night trek from the cabin to the Logan compound revealed grandmom Brooke Logan Forrester (Katherine Kelly Lang) kissing what appeared to be Santa Claus.

Of course, Deacon Sharpe (Sean Kanan) is the man who was involved in an engineered romantic re-connection. Dedicated B&B viewers recall the key role Douglas played in recognizing the true identity of Deacon’s granddaughter, Beth Spencer (Madeline Valdez and River Davidson), in the recent past.

Bold And The Beautiful Spoilers – No, That Was Not Santa Claus

Douglas appeared to be smiling while watching his grandmother smooching a red hat-wearing man. He likely thought she was kissing Ridge Forrester (Thorsten Kaye), based on the dimness of the living room setting.

Assuming that Douglas learns no more than what he thought he saw does not mean that Brooke’s terrible lapse in judgment will be buried.

Of course, Douglas will repeat what he witnessed to Hope Spencer (Annika Noelle), Liam Spencer (Scott Clifton), Thomas Forrester (Matthew Atkinson), or others.

Ridge could be told by Douglas that he saw him kissing Brooke, which Kaye’s character will know was not possible. That, combined with Ridge’s anticipated awareness of Brooke’s drinking, projects mega drama.

Bold And The Beautiful Spoilers – How Can Brooke Logan Forrester Explain Herself?

Brooke did not intend to drink alcohol. Recent strife, related to Ridge’s dissatisfaction with Deacon-related matters did not serve to push her over the edge.

Instead, Sheila Carter’s (Kimberlin Brown) incredibly invasive and dishonest actions placed what appeared to be a non-alcoholic bottle of champagne in Brooke’s hands on New Year’s Eve.

Viewers connected the Christmas Eve setup at Eric Forrester’s (John McCook) mansion, where one of Brooke’s former husbands served her the clean stuff, which tasted as good as the fuel Sheila purposely supplied to Brooke.

Ridge will have every reason to believe that Brooke broke sobriety and her vows until Sheila’s actions are exposed.

It is reasonable to assume that the man Ridge detests will be blamed for plying Brooke with liquor as well, as it came from Il Giordino.

Bold And The Beautiful Spoilers – Breaking The Bottle And The Case

Brooke broke the bottle of alcohol that appeared to be non-alcoholic champagne, which implies that the evidence has been eliminated from testing capabilities.

That likely means that Deacon will become the main suspect, with no way to prove that he did not intentionally give liquor to Brooke with the perceived intention of taking advantage of Ridge’s absence.

Brooke also chose to drink vodka, which gives Ridge reason to think that she acted recklessly. His feeling that Brooke has retained feelings for Deacon will seem to be proven.

Meanwhile, Sheila will be reveling in Brooke’s downfall. She sought revenge because of the threat Brooke made in front of Deacon at Il Giordino.

So, instead of Sheila being blocked from John Finn Finnegan (Tanner Novlan) and his newborn son, it appears as though Brooke is in danger of having her relationship with Ridge and Hope damaged as the new year dawns.

The Bold and the Beautiful Spoilers: Brooke Logan Is Going Down A Rabbit Hole

The Young and the Restless Spoilers: Chelsea And Sally Square Off – Turf War Begins Over Adam Newman