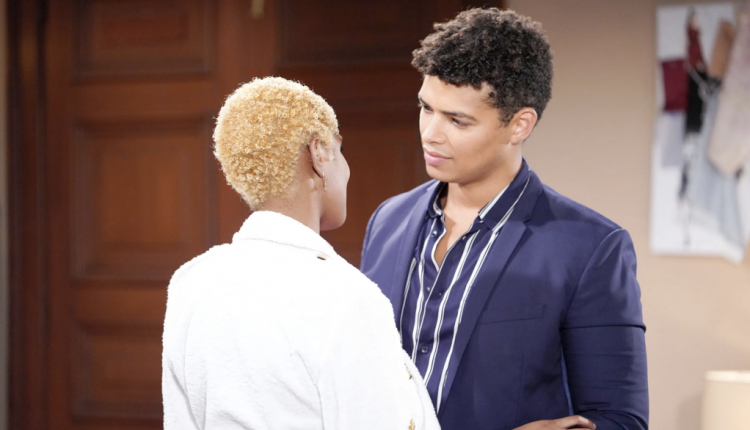 The Bold And The Beautiful (B&B) spoilers indicate that in Los Angeles Paris Buckingham (Diamond White) has a huge upcoming surprise for Zende Forrester (Delon de Metz). Is Zende ready for this surprise?

The Bold and The Beautiful’s Paris has decided to move out of Steffy Forrester (Jacqueline MacInnes Wood) and John “Finn” Finnigan’s house. This is a huge surprise for Zende who had already begun to get concerned over Paris’ growing attraction to Finn. Of course, Zende had a right to worry, Paris was already fantasizing about Finn. Staying in Steffy”s home would have been disrespectful. However, in Zende’s eyes, Paris could have been reminding him of her sister, Zoe Buckingham (ex-Kiara Barnes). Zende remembers all too well how Zoe came onto him while engaged to Carter Walton (Lawrence Saint-Victor). Zende truly cares about Paris and wants a relationship with her, but is she truly committed to a relationship with him? Zoe has a surprise for Zende to try to convince him that she’s into him alone, will it work?

Take Me Out To The Ballgame

The Bold And The Beautiful’s Zoe knows that Zende wants to attend the Dodger’s game. Zende is a huge fan but doesn’t necessarily think this is Zoe’s plan for an ideal date, after all, how many women consider a ballgame a date? Zoe decides to surprise Zende by inviting him to the game but this is not her only surprise. Zende is stunned when Paris walks out onto the field at the last moment and will kind of freak out a little. Fans aren’t typically allowed to go on the field at all and he could worry that Paris is about to get them kicked out of the game.

The Bold And The Beautiful’s Zende has no idea that Paris has been asked to sing “The Star-Spangled Banner” to open the game. Zende is proud of Paris but shocked just the same. How did she get this honor and why is he just now hearing about it? Zende can’t help but beam within admiration and love once the shock wears off. Of course, this performance was a real-life moment that was able to be worked into the script. White says she just wanted to do a good job and then sit back and eat a hot dog.

What about Paris’ feelings for Finn? White says that deep down Paris is a good person and doesn’t want to be a homewrecker. However, sometimes emotions get in the way.

Bernice Emanuel Feb 16, 2022
The Young and The Restless