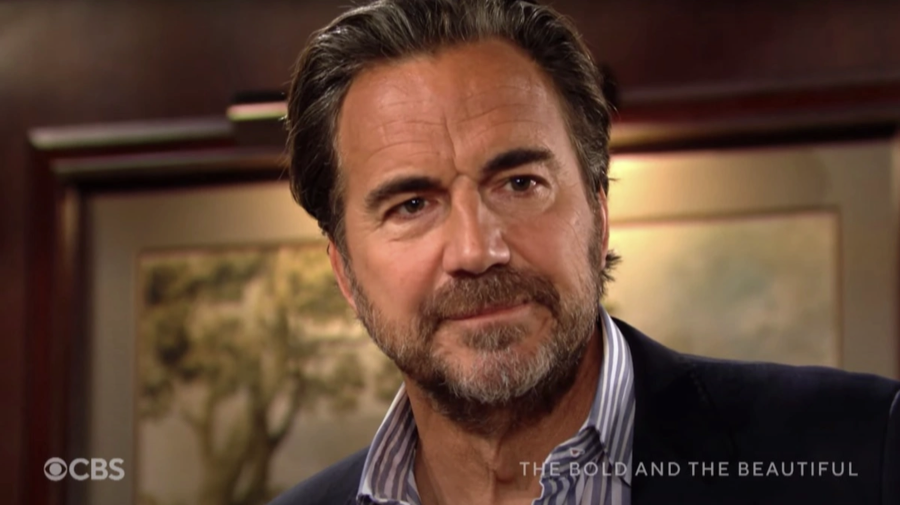 At Il Giardino, Zende Forrester Dominguez (Delon de Metz) wanted to make this a night Paris Buckingham (Diamond White) would never forget. He ordered up some expensive Champagne since they had so much to celebrate.

Zende gushed over Paris coming into his life unexpectedly and mentioned all the great things he saw in their future. He proposed a toast to new adventures, but he seemed quiet and distracted throughout their dinner. Zende admitted he had something small to take care of and got Paris to excuse him for a minute.

At Forrester Creations, Quinn Forrester (Rena Sofer) filled Carter Walton (Lawrence Saint-Victor) in on the engagement ring she designed for Zende. Carter found out Zende was going to propose tonight, but Quinn warned Carter to act surprised when Paris showed up flashing the ring around later.

Once Carter was alone, he muttered about how this wasn’t what Paris wanted – not at all! He texted Paris to warn her about Zende having a ring and how he was going to propose. Paris looked at the text just before Zende rejoined her at the table. She grew nervous as Zende started talking about wanting to have her in his future forever.

Meanwhile, Sheila Carter (Kimberlin Brown) listened as Deacon talked to another employee about the nonalcoholic Champagne bottle, which was being delivered to Brooke. Sheila managed to sneak over and swap it out with the real thing thanks to her label switch.

Sheila offered a cactus as a gift of gratitude and found out Taylor wouldn’t be spending New Year’s Eve with Ridge since he was out of town. She assured Taylor that good things happen to good people and remained thankful for Taylor’s olive branch.

At the cliff house, Steffy recalled how bizarre it was having Sheila there on Christmas Eve and hoped they wouldn’t have to see her for a long time. She acknowledged that Sheila was Finn’s birth mother, but she was glad they were getting this do-over celebration for New Year’s Eve without her.

At home, Brooke spoke to Ridge over the phone and got a promise that he’d be back before midnight. Once Hope Spencer (Annika Noelle) and Liam Spencer (Scott Clifton) arrived with the kids, Hope thanked Brooke for letting Deacon join their celebration as well.

Once Taylor returned to the cliff house, she talked about getting her practice up and running with ease. Taylor also revealed that the cactus in her hands was a “thank you” gift from Sheila, who wanted to offer her gratitude for Christmas Eve. Steffy didn’t look pleased to hear about Taylor’s surprise visitor!

Back at Brooke’s place, she opened the door to the Il Giardino deliveryman, who confirmed he checked the label and was giving her the nonalcoholic version. Liam and Hope had real Champagne, so they declined Brooke’s offer of the fake stuff – even though she said you could have as much as you want!

Next, Deacon showed up and thanked Brooke for inviting him. He saw that Brooke’s nonalcoholic bottle of Champagne had arrived before joining the others for Liam’s toast. Brooke led another toast later since Liam and Hope were ready to head home with the kids.

Although Brooke seemed to be getting a bit giggly and tipsy, Deacon shared a serious moment with her. He was grateful to Brooke for supporting his relationship with Hope and helping him turn his life around.

After Sheila sipped the real Champagne along with the nonalcoholic version in her hotel room, she commented on how they were almost identical. Sheila was downright gleeful at the thought of Brooke throwing back the bubbly and wished her a happy new year.

Back with Brooke, she was dressed for bed as she kept downing more glasses of Champagne. Brooke thought Ridge was home, but it was just Deacon coming back for his forgotten phone. He said it wasn’t like him to be forgetful and figured he must have a little buzz. Deacon thought he probably should’ve had some of the nonalcoholic Champagne instead.

After Deacon confirmed that Ridge wasn’t home yet, he complimented on how beautiful Brooke looked and felt Ridge was a lucky guy. Brooke wished Deacon goodnight, so he headed for the door while she took Ridge’s call.

Unfortunately, Ridge had bad news since his plane was grounded due to bad weather. Brooke was upset over Ridge not keeping his promise and commented on how she’d be alone on New Year’s Eve. Nearby, Deacon stood there watching and listening pensively.

The Bold and the Beautiful Spoilers: Zende Will Not Give Up On Paris But Carter Is Serious Competition

The Bold and the Beautiful Spoilers: Taylor And Sheila Secretly Plotting To Get Rid Of Brooke?

General Hospital Spoilers: Spencer Sees Esme For Who She…

Elizabeth Rose Jan 28, 2022
The Bold and The Beautiful

The Bold And The Beautiful Spoilers UPDATE Wednesday,…